We’re at the last games of the regular season. The Sharks (6-6) are currently located in the upper part of the Swedish second division (Regional series) at sixth place.

Here’s how the playoff works:
The top three teams qualify for the second round playoffs where the winner could earn a spot in the Elite series.
Teams placed 4-7 will have to play a first round qualifying playoff to earn the forth spot with the top placed teams in the second round.

The Sharks are scheduled to play Skövde Saints in back to back double headers (this Sunday August 19th at Shark Park and Sunday September 2nd in Skövde). Four games to go. That will put us in an excellent position to reach the first round of the playoffs with an outside chance to go straight to the second round.

Looking upwards, Uppsala has nine wins and five games left to play. Tranås currently in a position to qualify straight to the second round also sits on nine wins with four games to go.

In the unlikely event of Tranås are swept by Karlskoga and Alby and Uppsala are swept by Enskede and Stockholm B (and possibly a postponed game vs Sundbyberg B) the Sharks has a chance to qualify straight to the second round.

Winning at least three games out of the four left versus Skövde Saints will guarantee the Sharks a spot in first round play offs regardless how the other teams perform.

The league just announced that the first round playoffs are held in Umeå (8-9/9) and the second round is hosted in Karlskoga (15-16/9). 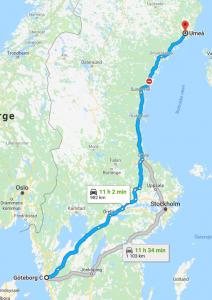 Umeå is located some 1000km ride by car up north in Sweden.

Join us for the last home game of the season at Shark Park on Sunday 19/8. First pitch at 12!