First regular games against the young Skövde Saints could have ended poorly.
Fortunately, the Sharks reached for some heroics late.
“Patience like snake,” Hiba Nabi says.

The Göteborg Hajarna (8-6) was indeed wriggling to start the first game against the Skövde Saints (4-10) on Sunday. Almost wriggling to stay alive at all. They did, however, start according to plan when earning a run in the first inning  to take the lead.

Skipper Jonny Edgren had a weird conversation with himself when he nodded to his reflection to take the mound and start game one. Then again, the Skipper needs to have full confidence in his starter.

Edgren actually looked kind of sharp, though on occasion rusty. Struggling with his control on occasion and gave out five free passes in his four innings of work. On the other hand, he only gave up three runs on three hits while punching out six.

“I always want to win. So when I gave the nod to Edgren to start the game I did have belief in him,” Edgren says… talking about himself.

Edgren handed the ball over to legendary pitcher Hiba Nabi and, well, it could have gone better. Game was all tied up at three in the fifth when Nabi struggled immensely from the get go. Walking five, he obviously struggled to get the ball over the plate as he gave up six runs on one hit in his 0,1 inning of work. Surely, Nabi will find his way back to his old days when the rust has been shaken off. 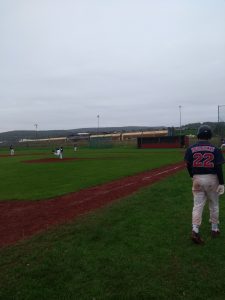 Josef Hussein relieved Nabi on the mound, but I forgot to write that.

Anyway, Skövde scored seven runs in the fifth and one in the seventh to lead it 11-3 in the last frame and the game looked all but settled. The Sharks faithful looked more interested in the delicious hot dogs than the field.

For some reason, Coach Edgren looked to this reporter to pinch hit and lead off the inning and he did not screw up. Starting it off with a single, the Sharks smelled blood. David Karadag struggled with his command and the young Saints squad showed some lack of experience on the defensive side to load the bases again and again.

The Sharks kept on hitting, walking and getting hit by pitches. As this reporter came up for the second time, he represented the winning run. A long single off the glove of Pontus Hummerhielm scored Josef Hussein and tied it all up. After stealing second, he come home as game winner José Muñoz slapped a single between third and short to end it in walkoff fashion 12-11.

“I never doubted these guys for a second,” Coach Edgren says.

Other than Muñoz, the Sharks were led offensively by Nic Ekström (2-4, 3 RBI), Rickard Kronqvist (2-4) and Klas Brinkfeldt (1-2) but really, all Sharks contributed offensively.

The second game really was not much to write home about. The Sharks found themselves in a hole as the Saints put up three runs in the top half of the first but quickly bounced back. Nine sharkfins swam across home plate as the rain started to trickle down in the bottom half and the game was pretty much done at that point.

The Sharks earned four more runs in the second and fourth inning before the game ended it the fifth with a score of 17-4.

José Martinez (4-3) earned the win as he gave up three runs (two earned) on two hits, walking four and striking out five. 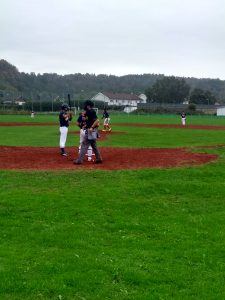 “While the possibilities to make it to the second playoff round are slim, we sure want to do all we can to make it,” Edgren says.

“Although we do want to go up and face Ted Bratsberg in Umeå, he knows that winning is better than losing,” the assistant manager adds.

Toofan Khazal is probably the best catcher in the league.

Martinez was so impressed with Ekström that he was hit by three pitches on the day, trying his best to imitate him.

Ekström was only hit by one pitch.