His final game turned in to quite a send off.
As Li-Heng Chu returns home, he will be missed at Shark Park
“He was brilliant today,” the interim manager says.

The first game between the Göteborg Hajarna (6-4) and Malmö Pilots (1-11) last week started off in the usual manner – with José Martinez (3-2) on the mound. The battery looked a little different however with Lars Karlsson behind the plate. Regular starter Toofan Khazal, along with Daniel André and coach Jonny Edgren, were missing from the Sharks lineup card, citing “playing a softball tournament in the Czech Republic”. Like anyone would believe that…

Anyway, Martinez and Karlsson looked to get along just fine. Martinez struck out no less than eleven Pilots while going the distance and earning the win. Unfortunately, the game was closer than it should have been since the interim manager put in this reporter at second base. Only to have him give up three runs on a ball between his legs that should have been an easy double play to end the fourth inning.

Martinez’s final line on the day was defiled by that error as he gave up eight runs (three earned) on six hits and three walks while striking out eleven.

“They looked good together, I was quite content,” the interim manager said of his battery.

Offensively, the Pilots took the lead in the top of the first but the Sharks answered right back with a run of their own in the bottom half. In the bottom of the second, the Sharks opened the flood gates as they batted all through their lineup and scored six runs all in all.

Unsung, and perhaps unusual, heroes offensively in that first game was Niclas Ekström (2-3, 2 RBI) and Daniel Linnås (2-2, 2 BB) who lead the offensive onslaught. That costly error in the top of the fourth made the game closer than the Sharks faithful wanted and it was tense until the final out was made. Game one ended 9-8 in the Sharks favor.

The second game turned out to be more of the Li-Heng show. In what was most likely his final game in a Sharks uniform, Li-Heng Chu (1-0) got the nod and took the mound with confidence. While he did gave up four walks, that was it. Although he only struck out one, he induced pretty much only weak contact that the Sharks defense handled with care and put out all threats with ease.

In Sweden, Li-Heng learned that winning is better than losing.

The four innings that he was allowed to pitch, he gave up no hits and eventually earned the win and praise from his manager and teammates.

“A true class act on and off the field. We’re sad to see him go,” the interim manager says.

An unconventional move was made after those four innings. With many regular Sharks missing, the interim manager turned to offensive juggernaut José Muñoz to take the mound. While he battled his control, he was effective when throwing strikes and earned the save while giving up three runs on seven walks while striking out four. 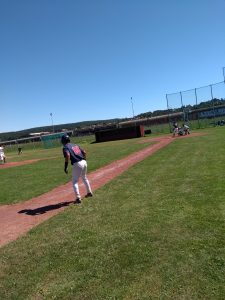 Muñoz did not steal home, but everything else.

The most surprising thing offensively was probably that Johan ‘Wheels’ Weidolf went hitless in this one. ‘Wheels’ have been aging like a fine wine this season but looked to be cooling off on Sunday. Still, going 0-4 lowered his batting average to a measly .590…

To add to a decent sendoff, Li-Heng went 2-4 with three ribbies and Martinez was flawless going 3-3. Adding to that, Muñoz stole six bases to lead the league with a total of 16. Sharks won game two 10-3.

Ekström was hit by a pitch.

Only one fly ball to the outfield was allowed by Sharks pitchers on the day.

Karlsson filled in admirably behind the plate and is quietly hitting a cool .440 on the season.