What do you feel is lacking in Swedish baseball?

Communication. I talked to a lot of other coaches and there is a huge disconnect between the decision-makers in this country and the players who are actually on the field. I didn’t talk to a single person from the federation while I was here. About scheduling, about rainout rules, about travel and about all those other issues that I was talking about with the other coaches.

There wasn’t a meeting at the start of the season presenting all the coaches, exchanging phone numbers and encouraging everyone to stay connected. There should have been more communication between everyone. It’s not a social thing, it’s a professional thing. And I think that is essential, especially at the elite level. At that level it’s got to be snappy, and having more communication between the coaches and the federation is necessary in making it all a little more professional.

Looking back on the season, what would you have done differently?

We had the potential to compete in the elite series when the right guys showed up and put in the time. But that hardly ever happened. It can’t be like, “I’m going to show up if these guys show up.” That was the vibe I got. Certain people were like, “If we have a decent team I´ll show up.” We crushed the Academy and that was when everybody showed. We had sufficient pitching, a full productive lineup.

Guys were like,” I’m sorry, I gotta do something with my kids or my job.” I get it. That is how you feed yourself and your family. I’m not gonna get on you because you want to do that. Obviously, I would like to have you there, but if you got something more important, do it. Just be real with yourself that you’re doing that, and not lead me on that you’re gonna be there.

Be more like, “Hey, I’m gonna show up for this but not that.” I’m fine with that, because then we have an agreement. Maybe that is what I could have done better, finding that out. If I knew that going in to it, I could have had social contracts in play. Like sitting down and talking with individual players and figuring out how to get them out more. That would have motivated more guys to show.

You can’t go out expecting to win two games with only the guys starting and maybe a pick-up bullpen piece at like shortstop. The machine is not going to run if it’s missing parts. Even in a seven-inning regional game, you never know how things will go. Anything can happen in a regional game. We saw that this year – umpires blocking runners, guys playing out of position, we saw field maintenance issues affect game play. It’s a circus, and so you got to prepare for that. Yeah, and if we can’t rely on guys being there, that’s a problem too.

The 2016 season will very formative for the Gothenburg organization and for those who want to keep it afloat.

How was it, being an American in Sweden?

When you speak English in Sweden everyone asks you, “What are you doing here?” And when you tell them, you get, “They have baseball here? Do you know what brännboll is?”

“Yes, I know what brännboll is”,

I’ve been asked so many times, “What do you think about Sweden? Do you like it? Do you want to stay?”  So many times that Sweden feels like a club with paying memberships. This is a country where almost everyone’s native tongue is a language spoken by only a very small percentage of the world’s population, and this makes for a very intimate culture.

It’s incredibly segregated, this city especially. It’s so apparent and real, and folks need to talk about that and acknowledge it. Because it’s different in the US. Here, in the city center, it’s predominantly white. In the US, it’s the other way around. That was a big eye-opener for me, coming here and seeing that. If you go to New York City you’re gonna see all people, all jobs, all different everything. But when you go to the suburbs, that’s when you’re going to see the big houses and the segregation.

Before coming here, you talked about how interesting it would be to live in a country that is so different in its political views as opposed to the States. How was that experience?

Sweden obviously has a stronger middle class and it was interesting to see the things the state provides for its citizens.

Sweden is not a country that is based on 400 years of slavery, and that minimizes things like police brutality and issues of white supremacy. And the social classes in the US… it’s harder if you’re black, underprivileged. I saw that growing up on a day-to-day basis in my school as a kid. Where teachers would treat people differently based on the color of their skin.

Sweden has one of the highest populations of refugees per capita in the world, and with the rise of the Swedish Democratic party I foresee more racial tensions.  This will definitely make this a more tense place in the next five or ten years.

Lagom was the biggest learning experience for me. This is something the United States could learn from Sweden. To have a view on life that excess is not necessary.

The weather…  I didn’t think of that much but I’ve only seen half of what the culture is like because I haven’t been here for the winter. Weather is a huge, physical presence that builds up the psyche. If I was really going to learn what it is to be Swedish, I would have to stay here during a winter to live through that darkness. And like having that kind of cold. 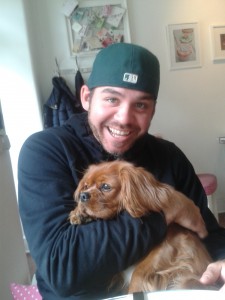 Admit it! You would huddle up with your dog too, Coleman.

Weather influences how people socially interact a lot, how often they go out, how people treat their dogs, kind of like they are children. Dogs are really obedient to the masters in this country. And I can see why. You’re huddled up inside with a creature for like 6 months so yeah, you’re going to be pals.

People talk about winter like they’re living in Game of Thrones. Winter is coming. Get ready. Winter for me in California, it’s like you put on a jacket, pants. More like yes, I finally get to wear a jacket.

What was the weirdest thing you noticed about Swedish baseball on the field?

The weirdest thing might have been a player stopping the ball in left field with his foot and throwing it back in. He stopped it with his foot like it was soccer. It’s like instinct in this country because people are better with their feet because they play soccer.

The umpires saying “strike out” instead of “strike three” was also weird. It’s not strike out, that’s what you write in the book. It is strike three and so you call strike three.  Also, seeing blacked out umpires was

among the weirdest things.