The Sharks are heading straight into the qualification series to stay in the Elitseries. The first chance is a best of three games series versus Alby, away.

The team is heading to Alby on Friday for a double header on Saturday. If no team win both games a third and directly decisive game is played on Sunday. The winner of that series will stay in the Elitseries.

We wish the Sharks the best of luck this weekend!

The Gothenburg Sharks are going to play Alby away to directly qualify to stay in the Elitseries. The games are already in your calendar if you subscribe to it. The games are scheduled to 31 of August with a double header. If no team win both games a tie breaker game will be played on the 1st of September. All games of that series are played in Seagull Park.

The teams that wins the series end the season there and then. The other team will get a final chance to stay in the Elitseries in a three game qualification series versus the Regional series playoff winner in mid September.

It is time for the final game of the regular season! The Sharks are heading towards Sundbyberg to wrap up the season. Sometimes the games matters everything, sometimes not. This is one of the latter games. Even with two wins the Sundbyberg Heat can’t pass Leksand since they are on the same amount of wins and the tie breaker is the winner of the last game between them. Sundbyberg won the first game in the double header and Leksand the one that matters, the last game.

The Gothenburg Sharks could pass the Akademin with two wins. The Sharks are one game behind but the Akademin won the last game between them. The Akademin ended their season with the double header in Gothenburg on the national day, June 6. They play half the season. Regardless, that will only affect the position in the series. The Sharks will still have to play quallifications games to stay in the highest league.

Gothenburg did not catch any breaks in the games versus Karlskoga home, nor Leksand away. They were closer the first game and lost big in the second, both times. Since Kerry got injured after pitching 120+ pitches in one game early in the season the Sharks have had problems with pitching and releaf. The bullpen is simply not deep enough to go two full games in a series this season. With that said, I’m happy to see that both Ted and Hiba are going to Sundbyberg tomorrow. Ted (18 yo this year) have been too eager to pitch and play and haven’t caught up with his basic training and have been injured back and forth the entire season. 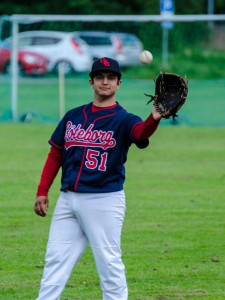 Hiba is another of the younger pitchers available (20 yo). Hiba started the second game versus Karlskoga two weeks ago and pitched six full innings. He did have some trouble commanding his pitches but overall I was impressed by Hiba. He did last six innings, he did strike out batters and he do got a few different pitches availble to him. Just get some more coaching during the games, some more innings pitched and he will become one of the corner stones in the Shark pitching. Ted pitched 1.2 innings in the second game versus Leksand last weekend. He started the first game away versus Stockholm May first, pitching three innings. He also pitched two full innings in the second game versus Sundbyerg almost a month ago. I hope that Ted could start taking care of his training and continue to develop as a pitcher and of course at bat so that we could see Ted play more games with quality pitching and no injuries. Those are the two I will follow closest tomorrow!

Best of luck in the last double header of the regular season!