As pitchers and catchers soon report, Hajarna.se wake up from hibernation. This time with news and notes from the annual meeting.

Heidi Bader was re-appointed as chairman of the board and continues her succesful reign for another season. Three spots on the board were open for election as Mathilda Silverwald, Mikael Lindquist and Jonny Edgren still has one year left on the term. The meeting approved the nominating comimttees’ suggestions of incumbent board members Daniel André and Toofan Khazal. This reporter was also elected to the board and will hopefully serve as an infiltrator and keep the board in line.

Marthe Roosenboom and Joel Earnest were suggested as alternate members and approved while veterans Johan Weidolf and Maria Kühnemuth will serve as the nominating committee. 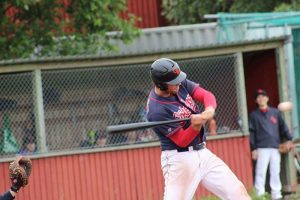 Eventually, Ekström was hit by a pitch in this at bat.

The fun part began as awards were handed out after the most successful regional season in years. We start with the Sharks version of the Silver Slugger:

Sorry for the shitty quality, I do not handle graphic things well.

On to the Cy Young of Sharks baseball. While we don’t have an official motivation for this one, it’s hard to disapprove. Mokhlad al-Ghamini lead the league in strikeouts despite not being close to the top in innings pitched. He struck out north of 17 batters per nine innings and averaged five more K’s than the second best player in the league.

Toofan does most of his diving behind the plate, not running the bases.

As for the 2017 Gold Glove of Hajarna Baseball, this one was also won in a landslide. Anyone who saw the Sharks play in 2016 noticed Toofan Khazals‘ improved his defence behind the plate im

mensely. He earned praise from the beat writers on a regular basis and emerged as a team leader. 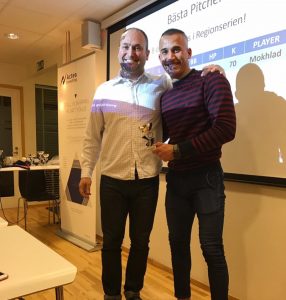 Both Edgren and al-Ghamini thinks winning is better than losing.

The MVP of the 2016 season was also Rookie of the year, if such an award was handed out:
“For consistent run production through aggressive but sometimes reckless base running, great range as a shortstop and most strikeouts in the Regional series. But also for being a good teammate that always shows up, works hard and brings his best game to Shark Park”
Hajarna MVP of 2016 was awarded to Mokhlad al-Ghamini.

The full schedule will be official as soon as the federation post it on their website. In short, the Sharks will host the Malmö Pilots on opening day on May 13th and close out the 2017 regular season with a swim as they play the Pilots away.

Besides the Regional series, the Sharks will once again play in the popular and much appreciated South West Baseball League starting on April 22.