Longest road trip of the season.
No worries, as the Sharks flew home on pink, fluffy clouds.
“Much needed victories”, coach Edgren says.

The Bombers(?) of Stockholm, commonly known as the Stockholm Monarchs (0-3), was blown away on Saturday. Göteborg Hajarna (2-2) went up smelling blood, wanting to erase the regional losses to Karlskoga a couple of weeks back.

The Sharks were a bit nervous if they would field a team at all, but long awaited season debuts from Hiballa Nabi and Josef Hussein got the Sharks out there. 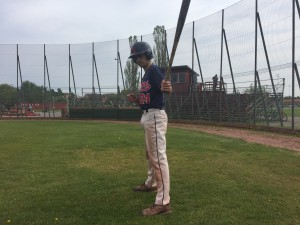 Shervin Shakki guided the Sharks right out of the gate as he walked, stole second, advanced on a wild pitch and scored on a balk. A lead the Sharks would not look back from.

Mokhlad Al-Ghamini (1-1) earned his first win of the season opened the game, pitching well in to the fourth inning. Al-Ghamini then ran in to trouble, walking the bases loaded and gave up four runs on an error and a base hit.

Al-Ghamini got his control back and struck out the last two batters in the inning. He finished the game striking out 11, walking 7, giving up 7 runs (4 earned) over 6 innings, as he earned that elusive first w.

Offensively, the Sharks took a 4-0 lead in the second inning before they lit up the scoreboard with five runs in the fourth, six in the fifth and six in the sixth to end the game with the mercy rule. Final score? 21-6.

“We wanted to be patient at the plate today, we did that today”, Coach Edgren says.

The Sharks started the second game quite similar to the first. The always humble Coach Edgren singled with two outs, stole second, took third on a past ball and was brought in on Al-Ghaminis single.

Shervin Shakki (1-1) started game two, maybe feeling some butterflies himself. Shakki uncharacteristically gave up a run in the first before settling down. After that, it was all easy peasy lemon squeezy for young gun Shakki through five innings as he struck out 1, walking 3 over four innings.

Shakki gave the ball to none other than legendary Sharks pitcher Hiba Nabi. Looking for a closer roll this season and if so, he will probably resemble the great Eric “Game Over” Gagne. Nabi was nothing short of stellar in this one, giving up a couple of runs but never giving the Bombers hope.

“It was great to see Nabi and Hussein in Sharks jerseys again. Much needed injection to the team”, Coach Edgren says. 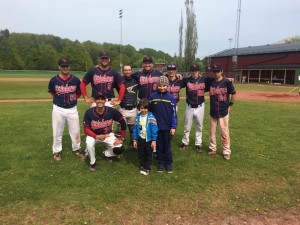 “Winning is better than losing”, as Gothenburg legend Jason Norderum used to say.

The Sharks bats woke up for real in the sixth, scoring six runs. The real highlight of this one was Al-Ghamini hitting a liner over the head of the bomber in left field and scoring on an inside the park home run.

Notables: Toofan Khazal again provided the Sharks with great defense behind the plate as the catcher caught both games.

Niclas Ekström played both games and was not hit by a pitch. Most likely the longest such streak of his career .

Next up: The Sharks play regional ball in Tranås on Sunday. First pitch at 12.00.

After faking their own death last weekend against Karlskoga Bats, the question was if Göteborg Hajarna would come out to play on Saturday.

That question was swiftly answered.

Saturdays matchup in the Southwest Baseball League (SWBL) saw the Sharks facing off with Jönköping and Kungsbacka and the Sharks did not disappoint the rabid home crowd. Right out of the gate, Hajarna was relentless on offense and starter Mikael Lindquist provided a stellar start on the mound as the Sharks took game one.

When facing the distant relatives of Jönköping, Mokhlad Al-Ghamini turned in a breakout performance in his short start on the mound. Young gun Shervin Shakki came out of the bullpen and tried his best to match Al-Ghaminis performance, without disappointing. 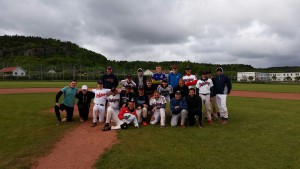 Sharks, Jönköping and Kungsbacka as one big happy family.

The bats were as red hot as in the first game and the Sharks tacked on runs all game long for a second win of the day.

“Offensively, we did a good job as a team today”, coach Jonny Edgren says.

What the Sharks do have to work on going forward was the defensive side. The somewhat new team have a few kinks to work out before the defense will live up to Edgrens standards.

“We can do better, and we will”, Edgren promised.

As always, SWBL was a treat for everyone involved. Players, coaches and the crowd preached the format and opportunity for more baseball on the west coast.

It was in many aspects a new Göteborg Hajarna that travelled to Karlskoga for the season opener.
Unfortunately, it was without a winning approach.

With the introduction of the South West Baseball League (SWBL) Göteborg Hajarna (0-2) came better prepared than to any season in recent memory. It’s been all winning for the Sharks in the friendly, spring training like games of the SWBL.

The Karlskoga Bats (2-0) was not going to be that easy.

The Swedish champions from 2012 pounded Hajarna starter Mokhlad Al-Ghanimi (0-1), who made his competitive debut in the Gothenburg jersey, and never looked back. Al-Ghanimi allowed all of the 18 Karlskoga runs (11 earned), gave up 11 hits, 10 walks but also struck out six.

Kent Karlsson (1-0) and Jesper Joelsson combined to no-hit the Sharks over five innings for the first win of the day.

In the second game, Hajarna actually came in to the second inning with a 3-0-lead but to no avail. Karlskoga Bats eventually got to Mikael Lindquist (0-1) who gave up 8 runs (2 earned) and reliever Shervin Shakki. Karlskoga took the game in the fifth with a 15-3 score.

Shakki did produce at the plate, going 0-1 with two walks and a run scored. The bright spot in the Sharks offense was the patience at the plate with the team combining for 5 walks in the second game.

“We can do better, much better”, newly appointed coach Jonny Edgren says.

Next up is SWBL games on May 14th against Jönköping and Kungsbacka. Next up in the regional series is an away game to Stockholm B on May 22.

Also, this reporter apologizes for the late recap and promise he will do better.