This reporter do not know the english translation for  ‘Mästare i kavaj’.
Regardless, that’s how the Hajarna players felt on Wednesday.
“This is what we have been working for all season,” coach Edgren says.

Enskede was the only team standing between Göteborg Hajarna and the playoffs for a possible Elitserien spot in 2017. Now they can focus on that spot.

With Enskede losing two hard fought games against an Alby side that has only lost a single game during the regular season, the playoff spot is real.

“Call me psychic, but I knew all along we were going to get there,” Sharks pitcher Mikael Lindquist says.

Enskede lost an interrupted game 13-12 in seven innings and the second one 14-11 in nine innings. 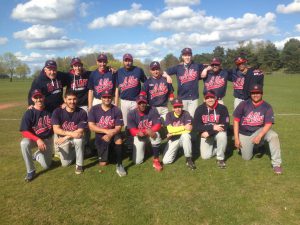 “I played with those (Enskede) guys and know they play hard. All credit to them,” an anonymous Shark player says.

Hajarna will face either Tranås or Karlskoga in that first round. And coach Edgren knows it’s going to be tough either way.

“Two great teams. We’ve won one against Tranås this season and look to take at least a split from Karlskoga in the last homestand of the regular season,” Edgren says.

They will go in to the playoffs without legendary Sharks pitcher Hiba Nabi who is to undergo season ending knee surgery.

“I hate to not being able to contribute but I’ll be ready to go in 2017 and I know the team will play their hearts out,” Nabi says.

The Sharks finish off the regular season on September 3rd against Karlskoga at Shark Park.

The first one of the doubleheader versus the Malmö Pilots (2-10) proved to be a real treat for the Hajarna faithful.  Starter Mikael Lindquist was productive from the mound as he held the Pilots to one run in his first three innings of work.

The heat got to Lindquist by the fourth inning, and so did the Pilots. With a solid lineup, the Pilots scored five runs in that inning which also included Göteborg Hajarnas (8-6) only play that might have been considered an error in this match.

“It felt good out there, I pitched well and the guys played great defense behind me,” Lindquist said.

Down 6-1 in the bottom of the fourth, the Sharks answered with two runs of their own, tacked on another one in the fifth but still trailed 6-4 going in to the bottom of the seventh. The Sharks quickly scored a run after a walk and a Mokhlad Al-Ghamini triple. Trailing one run with a runner on third and no outs the Sharks smelled blood.

Unfortunately, when the Sharks hit it to an 6-5 double play as Al-Ghamini did not get back in time to third base, this one looked lost to the home team. With two outs and nobody on, Hajarna fought  back. Hannes Wiström and Fredrik Unger both reached safely and Niclas Ekströms clutch RBI single sent the game to extra innings.

On the mound, swirvin’ Shervin Shakki (2-1) held the Pilots scoreless through four innings  until he finally succumbed and gave up a run in the ninth inning. Once again, the Sharks was down to their last three outs of the game.

It would be their final three outs.

As well-played as the game was, the final at bat was not. With a runner on third, Sharks rookie Eric Marquez came up to the plate and battled Pilots starter Bradley Chalker (1-1). Eventually, Marquez hit a slow roller to second base that looked to send this one in to the tenth inning but the Pilots bobbled the ball, Marquez was safe and the Sharks found themselves swimming off to victory in the first game and Shakki got his second win of the season.

“Probably our best performance all season. Great pitching, lots of offensive production all through the lineup and no errors.” coach Jonny Edgren said. 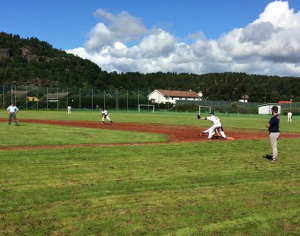 The Sharks first base coach was quietly heard murmuring “Winning is better than losing”.

If the first game of the double header was well played, the second one was quite the opposite. Sharks started al-Ghamini who in dominant fashion went four innings giving up one run on three hits while striking out nine and walking two.

The Sharks bats stayed hot in the second one, erupting for seven runs to back al-Ghamini and as coach Edgren took the ball from him they were up 7-1 after four innings. Edgren inserted himself on the mound but could not insert any balls in the strike zone. While he got out of the fifth inning, he needed help in the sixth.

After giving up six runs, Edgren looked across the battery and called for catcher Toofan Khazal to take the ball. The nifty trick of the catcher-pitcher switch worked in the Sharks favour as Khazal put out the fire providing two innings of one-run ball (unearned) relief on two hits, a walk and a strikeout.

While the Pilots scored the seven runs off in the three final innings, the Sharks was not to be messed with on this day. They scored eight on their own as the swept the Pilots, taking game two 15-8.

“It wasn’t pretty but we got the job done, I’ll leave it at that,” coach Edgren said.

With the regional series soon coming to a close, the Sharks are in sixth place. The only team that can elude them from a playoff spot is Enskede who still has six games to play. They need to win five off those games to tie with Hajarna. Los Nicas also has to win a game to tie the Sharks and win their last two to pass them.

The Sharks has two games of their own left to play and can secure a playoff spot at home against Karlskoga on September third.

“We want to be there. We’ll do everything we can to make it,” coach Edgren concluded.

Niclas Ekström was as usual hit by a pitch but also went 3-5 with a walk and one RBI. Ekström now leads the league in OBP at .685.

Mokhlad al-Ghamini stole six bases on the day, now leading the league with 21. He still leads the league in strike outs with 59.

The Sharks temporarily (?) looked like a different team. While playing moneyball baseball all season, they had 27 hits on Sunday, by far the most they’ve had all season.

Prior to the 2016 season no one thought of Hajarna as a .500 club.
Not even Coach Jonny Edgren.
“We have exceeded expectations,” Edgren says.

Rewind to the start of the season and the Sharks of Göteborg looked like a team in dismay. The challenge was not as much winning games as it was actually putting a team on the field.

It is a totally different story now. 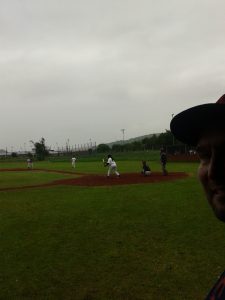 Edgren at the last Malmö matchup. Right before this picture was taken, he said “Winning is better than losing”.

“The team has exceeded my expectations for sure. I’m proud of them,” Edgren says.

With the double header against the Malmö Pilots on Sunday, the Sharks are looking for that elusive playoff spot to once again have a shot at Elitserien. At 6-6, they are in seventh place in the standings and would right now face Tranås in the first round, a team they have beaten this season. Coach Edgren, however, is cautious.

“The best thing about this season so far is that it’s been so positive. We have had a lot of veteran guys coming back, providing leadership. A lot of new guys showing up with lots of energy. This group of guys are so fun to be around,” he says.

When the Malmö Pilots show up at Shark Park tomorrow they will do so as underdogs. Hajarna has won three out of four games this season. As cautious as Edgren is, he is, as always, looking for wins.

“The games against the Pilots are always fun, always well-played games. Usually close games.”
“I am looking forward to them, and yeah, I always want to win games. Tomorrow is no exception,” Edgren says.

First pitch tomorrow is at 12.00 at Shark Park. Second game usually starts at around 14.30.