First of all, will you continue to follow the organization?

Yes, yes for sure.
I’m very invested. I care about the players. And at the end of the day, I just want the players to get better, to do well. As a coach, you have a relationship with the players, you want them to get as good as possible and develop. And this was why I reached out to the board to try to convince them that the organization should take a step back to the regional level.

Less time and travel will be involved in regional play, and with the elite players bringing their experience to the regional level, a program can be built from the bottom up.

How do you see the team developing in the immediate future?

Having guys like Joe and Erik come back and play would be your dream come true. They can be your number 3 and 4 hitters, play up the middle. Joe was a major contributor this season, and he would add like .200 to his average playing at the regional level. And with Erik, you would have the best player in the league. They know the program and can lead this club. 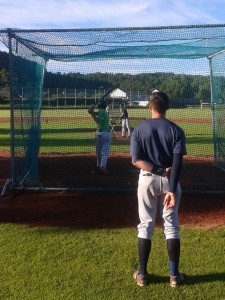 Jonny is also back from Japan and I think he’ll be ready to contribute, take that corner infield spot. Close out games.

Trolle is a bright spot in the future of the Gothenburg organization and he’s got a career ahead of him. The kid’s got the X-factor, he loves the game and he’s got the drive. He understands what it takes to play at a high level.

Shervin… he showed he can come in and pitch 3–4 innings and his bat is coming along too. There is a high upside for him.

Joakim… extreme improvement this season. I mean, him coming on to the hill with a guy like Youssef, that’d be good.

Youssef is someone you need on the team. He can eat innings and has a high upside. Good competitor, knows what he is doing. He is a resource, and a guy like that is essential.

If Hiba and Josef show up more, with them, Joakim, Sherwin and Ted you have a solid, young pitching staff that will get you through 14 innings of baseball.

Guys that have passion. That’s the kind of players this organization needs more of. Guys that come in young, show up and have passion for the game. And who understand what it takes. Guys who want to be there. Working hard in the off season, that’s important too.

The club has to get a new mindset, a new attitude. You got to have some flare, you got to have some pride and confidence. Especially when you go up against a guy like Stockholm’s Jakob Claesson. I hit a double off him to the right-center gap on the first pitch. I give the shark fin at second even though we’re in last in the standings – that sends a message.

Obviously the conditions are different. When I’m at a high school practice, I’m talking to thirty Trolles. Talking to kids who want to play college ball. Going out to the field in the US there’re assumptions you have about players, about the day-to-day stuff in baseball that I couldn’t assume here in Sweden.

I think the reverse engineering aspect in my coaching has been the biggest positive for me here. Gaining that ability to move backwards and take it all apart and put it all back together again is an incredibly valuable skill that I will take with me. In the States, kids in Little League are just copying big league swings. Here it’s a lot different. Much more of a challenge, getting people to make the adjustments.

And the guys made the adjustments, and they bought in. That’s something I’m really grateful for. They wanted to get better, and did get better. And you guys who were out there, you did it! The regional team batting average jumped .80 points and we were winning games. That was really amazing to see. And that’s the best kind of experience for me as a coach.

The thing of the year for me: Joel Earnest showing up every day. Bullpen practice, regular practice. Every game. Dude hit .322. He’s 67. The guy hit fucking .322. Like everybody can do it. Joel is talented but he had the most grit in the organization. Surpassing me and Jason. He had a goal, he set it, he bought in, was enthusiastic and that to me is one of the best memories of the year.

If you ask yourself when you go off the field after practice, if you’re a better player than when you stepped on the field and the answer is yes, that is a good thing.

More participation. Baseball is a game that isn’t limited at all to just guys. I played against girls up through high school and would really like to see players from the softball team join us on the baseball team, they would do fine. The organization should definitely try and implement that next season. Look, whoever is willing should be given the opportunity. 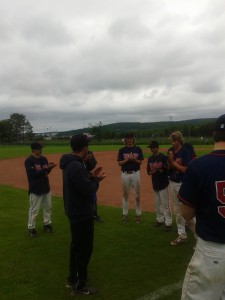 Personally reaching out to veteran players who are on the fringe with “hey, you are a huge asset, we understand that you can’t practice and are probably uncomfortable with taking playing time, but we need you and you can really help this organization.”

There are enough core players on the regional team right now with the ability to compete with Karlskoga and Tranås, as we showed this year. Next year if we optimize our talent and work ethic, we can beat both those teams. And with enough veteran elite players returning, we’re talking playoffs.

What are your thoughts on recruiting and developing youth players?

The biggest problem for the Sharks is that the field is so far away. A kid that comes from Frölunda has got an hour on the tram at least. That’s a long haul. And that’s why our organization should try and get a field closer to the city center, both for visibility and for access. Baseball is exotic in Sweden, and you should take advantage of that.

You make the game accessible and instead of saying, hey we’re having youth practice. You say, hey, we´re starting a youth TEAM. We want twenty kids from Gothenburg who want to play baseball and play on a baseball team. Kids want to be a part of something. They want to look up to older players. And don’t limit yourself to just boys. We want twenty KIDS.

You need the numbers out there so that the kids can actually play games, be in real baseball situations. And to do that, there has to be more opportunities to play baseball at more accessible locations. A kid is not going to hit the ball super far. So you can still use a hard ball on a makeshift field closer to downtown without hurting anyone. Why not Slottsskogen?

With the schools, I have been in the trenches of recruiting baseball players in Sweden. I have talked to nine year olds and 16-17 year olds. Showing them a bat and a ball for the first time. At every school, there is always one or two kids that are attracted to it. Getting them out there is another story. The interest is there, capitalizing on that is where the challenge lies for Swedish baseball. We did like thirty different schools in Gothenburg with twenty kids a session on average. In total about 500–600 kids, and three showed up at the field. Getting kids out there is hard and we don’t need to make it harder.

Another thing that is important in recruiting youths is having a Swedish recruiter out there. Just having English speakers doesn’t work. Even though there is a certain coolness factor with having a guy from the US there, when I’m explaining stuff to nine year olds in English, they’re having a hard time out there. And needing to teach a teacher and then having them translate it… it’s tough. Having a Swedish speaker out there would be bueno, very helpful.

Heidi… she has been amazing for the organization. I have the highest respect for Heidi in terms of hearing the coaching staff out, being sensitive to player issues, fundraising and helping out with schools. A real MVP!

Part two of the series will cover Coleman’s take on Swedish baseball and Sweden in general.