Late last year, Sweden started a male, fastpitch Softball team.
Three Sharks went for tryouts, all three came back with spots on the team.
“I’m of course proud to put on the National team jersey and run out on the field,” Daniel André says.

During the end of 2017, the Swedish Baseball and Softball federation scoured the land for someone to take on the challenge of becoming the National team manager men’s softball. Not an easy task, one might think.

It landed on Israel ‘Izzy’ Nukunuku out of New Zealand. ‘Izzy’ (not to be confused with the Shark’s Izzy), has been working with the Danish and Dutch teams for over ten years before coming over from the dark side to join the Jedi forces of the European baseball scene.

“The skill sets [on the players] were rusty but the heart and drive to do well was there. Don’t get me wrong – there is a lot to work on but when you have that drive it’s easier to channel in the right direction,” ‘Izzy’ says to dugout.se about his new players.

The Sharks that went to that open tryout was André, Toofan Khazal and Jonny Edgren. All three earned a place on the team and has, during the season, combined the grueling baseball season with softball on the side.

“It’s inspiring to play alongside a group of very motivated guys from organizations from all over the country,” Khazal says.

André mainly play the outfield in Softball, Edgren tries to pitch as well as hit and Khazal, of course, catches.

But softball is not baseball and while none of the Sharks representing Sweden are young guns anymore, they seem to have adapted well to the higher pace of the softball game.

As the European Championships is fast approaching, June 25-30th, the National team has working out against the danes in April and a tournament with Alby and Venezuela in Stockholm. During the Euros in Havlíčkův Brod, Czech Republic, ‘Izzy’ is humble but still looking to win. 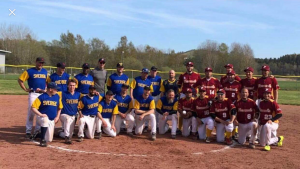 It was unclear which team enjoyed winning better than losing.

“The goal is to be competitive in every game, some have goals on winning their  first games – but if we stay competitive we can win this and more,” ‘Izzy’ says to dugout.se.

The next chance to see your favorite Sharks in a national team jersey is in Skövde during the Baltic Open in Skövde on June 16-17.