These Sharks never give up.
These Sharks know that winning is better than losing.
These Sharks got the better of Alby.
”It went down as I expected,” Coach Jonny Edgren says.

After two quick outs, the Alby Stars got on the board in the first inning against Sharks ace José Martinez. Behind an error and a wild pitch, the Stars got to an early 2-0 lead. Offensive juggernaut José Muñoz took one right back in the bottom half of the first one. Reaching on an error and then stealing both second and third before scoring on an error as Daniel André drove him in.

Sharks starter Martinez was battling the solid Stars lineup and more often than not pounded the strike zone. The Sharks put on a quality defensive display, probably the best they’ve played all season, and kept the game in control. Especially impressive was Muñoz at shortstop who showed off his range and cannon to throw runners out on a regular basis.

With the score at 9-8 in favor of the Stars, the Sharks got going again in the bottom of the 7th. Solid hits all trough the Sharks lineup as Göteborg sent ten men to the plate and the Stars could not get out of it. The Sharks got eight runs in that marvellous 7th inning and never looked back. 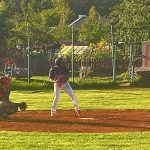 Martinez was solid at the plate as well.

“I know that we have a good team, when we play like a team, we can beat pretty much any team. Today, we did just that,” Edgren says.

Martinez closed out the game, allowing one run to score in the 9th to make the final score 16-10.

“He pitched a hell of a game. A little shaky at first but once he got going he was pretty much on spot on all through the game,” veteran backstop Toofan Khazal said at the post game press conference.

The Sharks will play on Sunday against Los Nicas who routed Tranås earlier on Saturday, making in 16-1 in six innings. It will be a whole other matchup as the Nicaraguans are pretty much the most complete team in all of the regional series. 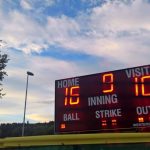 They had a real scoreboard at Seagull Park.

“It’s gonna be tough. But when faced with challenges before, this team has risen above expectations,” Coach Edgren added.

Niclas Ekström came in to pinch hit and went 2-2 with a double.

Eric Marquez made a play at second base worthy of the MLB web gems.

Ted Bratsberg was not at the game. Possibly because there was no fence to put up.

Skipper Jonny Edgren got a hit.

The sun was shining all day long.