A year of winning ended with losing.
But the Sharks fought valiantly on Sunday.
“Winnings is better than losing, but sometimes it’s not meant to be,” Coach Edgren said.

Behind starter Shervin Shakki, the Sharks mistook Los Nicas red shirts for blood and got going right off the bat. With Santo Anibal Blanco on the mound, José Muñoz got going in the top of the 1st. With Muñoz at third base and Niclas Ekström at first, a missed pickoff attempt to first ended up scoring both runners to take an early 2-0 lead.

Göteborg Hajarna added to their lead in the third, going up 3-0 on a Los Nicas squad that looked stunned. From the normally very jubilant crowd, mutters could be heard. However, they didn’t have to stay patient very long as the Nicas got to Shakki and scored two runs in the bottom half of that third inning and made the game a close affair.

It was going to stay close.

After a scoreless 4th frame, Los Nicas once again made their bats do the talking as Shakki loaded the bases with one out. Coach Jonny Edgren took the ball from Shakki and handed it over to former starter Mokhlad al-Ghanimi.

Straight from the bullpen, al-Ghanimi looked solid but Los Nicas made him pay anyway. Fine hitting from the Nicaraguans drove two runners in before the former Iraqi international could get out of it. Down by one run, the Sharks once again made their bats ring and evened the score in the top of the 6th. 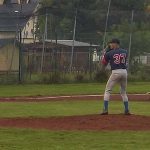 al-Ghanimi was good at tossing the ball.

Unfortunately (for the Sharks), Los Nicas scored two more runs in the bottom of the 7th to make it 6-4. The score stayed that way until the top of the 9th inning. Coach Edgren, who humbly had inserted himself at first base, got hit by a pitch to lead off the inning. José Martinez then flew out to deep left field for the first out and Eric Marquez drove a single to center field to put the winning run at first base.

al-Ghanimi then unloaded for a hard single to score Edgren from third and advance Marquez to third. Not before long, al-Ghanimi then stole second to put the leading run at second base.

With the home crowd behind them, Los Nicas turned to their closer, Alejandro Davila, against Lars Karlsson. Karlsson fought valiantly at the plate and eventually earned a walk to load the bases. The tying run was 90 feet away. Coach Edgren, for some reason, brought this reporter in to pinch run for Karlsson.

Daniel, ‘Big D’ André stepped up to the plate to pinch hit. Alas, this was not el dia para Los Tiburones and André grounded to first base for the 3-2-3 double play to end the game with a final score of 6-5 in favor of the Nicaraguans. 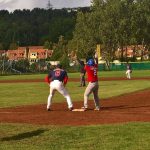 “We kept it close. We almost had this one and when we play as a team, like we did today, we are so very strong,” Coach Edgren said.

The joy among the Los Nicas players and fans could not be mistaken. Chants about Elitserien play was ringning out all across Alby and it will surely be interesting to see what they can do in the top division come 2018. But they had to work for it as the Sharks put up a great display of baseball.

“This Sharks team, they never cease to amaze me,” a tearful Edgren added before leaving for greener pastures (the drive home to Gothenburg).

Göteborg Hajarna this weekend played what was probably the best two games that the Sharks faithful has seen in the last two or three years. The rebuilding strategy from the front office is a success so far. If the team can add a couple of players and keep developing the guys in the current squad – Elitserien is not far away. 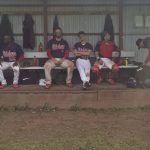 It might not look that way, but this bunch was kinda happy.

“That [Elitserien] is our goal of course. That is where we want to be,” veteran backstop Toofan Khazal added.

Surely, this heartbreaker of a loss feels bad right now for the Sharks team but they will hopefully feel proud about what they’ve accomplished during the season.

“It was a hell of a run and we played our best baseball when it counted the most. That feels pretty darn good,” free agent second baseman (and future Malmö Pilot?) Marquez added.

The Sharks will possibly close out the season with some SWBL action at Shark Park. If not, this here ‘news’ site will next be seen with a season review of the squad.

Edgren got a hit.

Muñoz played defense so great it drew cheers from the Nicas fans.

Niclas Ekström was not hit by a pitch but played great defense at first base.

Joel Earnest, 69, drove a single to right field on the first pitch he saw.

The combined blood pressure of the Sharks team during that final at bat was not healthy.

Khazal, as always, put in a strong defensive effort behind the plate. Despite the home crowd trying to taunt him…

Hannes Wiström is turning in to a solid third baseman.