A sweep might not be unusal anymore. But being in first place sure is.

Göteborg Hajarna (6-2) got on the board quickly in the first game but the Malmö Pilots (0-7) answered and had a 5-4 lead going in the fifth inning. Starter Shervin ‘Swirvin’ Shakki was somewhat erratic initially but settled down and looked like his old self after a couple of frames.

“Even when he’s not at his best, he pretty darn good,” third baseman Eric Marquez said.

Behind reliever José Martinez, the Sharks got going and took game one 10-5.

Mokhlad al-Ghanimi started game two and looked like himself, mixing strikeouts with walks and overpowering hitters with his fastball. Al-Ghanimi and José Munoz got the Sharks going offensively with two runs in the first.

After that, Hajarna looked comfortable as they added run after run and eventually won game two 7-2 behind Martinez second relief appearence of the day.

Notably, Hajarna looked a lot more comfortable at the plate with the high point being Fabian Hanning going 3 for 4 with a couple of ribbies. Also, catcher Toofan Khazal combinde with his pitcher for no wild pitches or passed balls.

“I’m got the advice to be more german and it worked, ” Hanning said.

With the two wins, Hajarna move into first place but Alby can take that back with a second win against Stockholm later today. 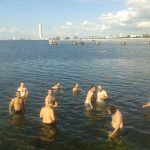 Winning and swimming is better than losing.