Looks may be deceiving.
The same team might not be the same team.
“Other guys will have the chance to shine,” Coach Edgren says.

Swedish baseball, on occasion (or always), can be called bush league. During the hectic summer weeks, teams get depleted on the basis of vacations and such. Göteborg Hajarna (6-2) is no exception as they are short a whole pitching rotation coming into Sunday’s game versus Tranås (2-2).

With Mokhlad al-Ghanimi (3-3), Shervin Shakki (2-1) and José Martinez (2-0) all out of action, the Sharks will have to look for new arms to step up against the division rival Tranås.

“I feel ready, I feel confident, put me in coach and all that good s**t,” Eric Marquez says. 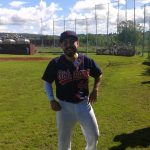 Marquez is an option that the Sharks coaching staff is mulling over. As is coach Edgren himself who’s had success over two centuries. Other than that, veteran reliever Joel Earnest is available as well as Toofan Khazal and Rickard Kronqvist.

“We have multiple options, I just want to help the team and I’m ready to do so if skip needs me,” Marquez says.

On the offensive side of the ball the Sharks are looking to comeback kid José Muñoz to spearhead his team. Muñoz would have been gunning for the league lead in most offensive categories if it would not have been for the ridiculous and stupid rules of Heatstat. Nonetheless, Muñoz is sporting a cool .615/.769/.1475 slashline going into Sunday’s game.

The Sharks have had a short summer holiday as they’ve not played in the regional series for three weeks when they swept the Pilots in Malmö. Coach Edgren did, however, had a squad in Skövde a week ago for some SWBL action.

Tranås, on the other hand, has not had a regular season games since May 21st when they swept the Sharks at home.

First pitch is at 12.00 @ Shark Park. Make sure to be there early before the bleachers are full.