The Swedish junior national team is playing a Euro qualifier against Croatia in July. Since there is open spots on the roster, a tryout was held in Skarpnäck, Stockholm, on Monday and Tuesday. Hannes Wiström and Shervin Shakki represented the Sharks.

Wiström and Shakki at the field after the subway adventures.

“It was a good learning experience, a lot of coaches with a lot of experience. They knew what they were talking about,” Wiström says.

To get there, was more of an adventure. Sharks, as you might know, does not adapt well to life above ground and public transportation is a bit of an issue. When the Sharks found themselves in the big city, it was close they wound up far from the field. 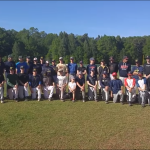 A group of people who agreed that winning is better than losing.

At the field, they were working with a lot of fundamentals, physical tests and such. Rumor has it that Shervin Shakki showed off the blinding speed that he soon will be know for.

“It’s been a lot of fun to play with guys our own age,” Wiström says and apparently, Shakki agreed to a lot of the statements.