The Hajarna faithful are familiar with the (very) young guns Gillan André and Allesandro Cassani to represent The senior Sharks in the future. But as the Baby Sharks are still not a full squad, they took matters into their own hands and represented Skövde in the youth tournament Billingeslaget.

Cassani played solid defense for the U15 side, both at shortstop and in center field. On the other side of the ball, he recorded a stolen base and got a walk. 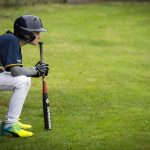 Cassani might be contemplating if winning is better than losing?

For André, the team in question was the Skövde U12 and he was all over. André provided slick defense at first and second base while getting a couple of hits. He also featured on the mound in the second game as he struck out one in a 1-2-3 inning of relief. 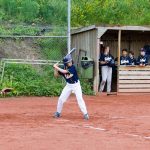 André at the plate.