Miracles do happen.
Sharks can walk on water.
“This is baseball,” coach Edgren says.

No one would have believed this when the Karlskoga Bats (5-3) came to town. This reporter is not a fan of quoting himself, but the 2017 preview of the opposition says:

It will be exciting to see imports in the regional league and especially so with an ambidextrous pitcher. While it’s safe to assume that the Sharks, nor any other regional team, most likely will not stand a chance against the Bats, it will be fun to host them at Shark Park.

And fun it was.

José Martinez (2-0) started game one for the Göteborg Hajarna (4-2) and was lights out to start the game and held the Karlskoga Bats scoreless through three innings behind a surprisingly stellar defense. As the Sharks roster for the game were 17 strong, few of them had showed up for practice.

“Just imagine how good we would be if all of these guys had the chance to work on their stuff,” coach Jonny Edgren says.

The Sharks lineup got behind their starter as they scored 3 runs in the first and added two more in the second off of Bats starter Forrest Weaver (3-1). The ambidextrous Weaver only pitched 1.2 innings as he and Sharks shortstop Mokhlad al-Ghanimi collided at a play at the plate and Weaver had to come off the mound. al-Ghanimi, unfortunately, had to come out of the game altogether. 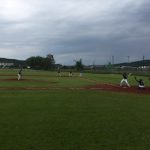 The weather was not kind on this day.

The Sharks offensive forces were pretty much done for the day and the Bats threatened in the 4th with the bases loaded on a couple of occasions but Martinez held them to 3 runs. Behind that solid defense, the Sharks held on to the first one despite being shut out by Bats reliever Rafael Torres and Simon Högberg.

Notably, that Sharks defense was led by comebacking José Munoz and Niclas Ekström (both coming off the DL just in time for the game) and the solid battery of Martinez and Zaki Yamazaki.

Back on the field and on the mound for the second game was Mokhlad al-Ghanimi who battled through his foot injury but was not at his sharpest. This might also have been a consequence from the rain that just would not give in. While al-Ghanimi only gave up one hit on the day, he walked a whooping 9 batters and hit at least a couple more.

And the rain kept pouring.

“This ain’t no weather for a black man,” center fielder José Martinez said.

The Bats took advantage of that and got the 1-0-lead in the 2nd and adding 4 more runs in the 4th. The Sharks, on offense, looked abysmal to say the least as they could not figure out Bats starter Simon Högberg at all. Fortunately for the Sharks, starter Shervin Shakki came in to relieve al-Ghanimi and pitched great as he held the Bats hitless for three frames.

Going in to the 7th the Sharks faithful had left the stands and down 5-0, this one looked nothing but over. But when Eric Marquez reminded the team that winning is better than losing, it wasn’t.

Daniel Linnås started the inning off by drawing a walk from reliever Anton Calson (0-2) and from there on, it was a fairy tale for the Sharks. When veteran Johan Weidolf came to the plate with the bases loaded, he represented the winning run. Weidolf hit a double down the right field line and set the stage for Martinez to be the hero once more. Martinez rose to the occasion and hit a ground rule double for the walk off victory. 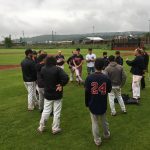 Edgren rounding up the day.

“We had great discipline today, that was the key for us,” coach Edgren said.

Shakki is batting .416 on the season.

Niclas Ekström, in his comeback, was not hit by a pitch.

Hajarna totalled only five errors on the day.

Joel Earnest was overheard talking about on base percentage.