The Sharks swept the Malmö Pilots in Saturday’s opening day doubleheader by scores of 10-7 and 16-6 behind solid pitching from Mo Mo AL-Ghanimi, Mikael Lindquist, Shervin Shakki and Jose Martinez.

Despite what might be suspected by the high scores in Saturday’s doubleheader, pitchers from both teams pitched effectively, but with spotty defense, it was seldom enough with three outs to get out of an inning. Balls bounced off gloves and rolled between legs one minute, but were flagged down with highlight-reel catches the next.

Aggressive base running was exhibited by both teams Saturday, but not necessarily smart base running. There were pickoffs, missed signs and even one play with two base runners both heading for second but from different directions.

What it came down to was that the Sharks had the pitching depth to compensate for their mistakes, the Pilots did not. 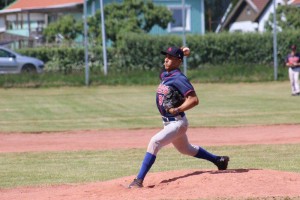 “We can play much better than this,” Coach Edgren reportedly told the team in a closed door session after the game. “And we will.”

Meanwhile the first base coach was seen in a corner of the clubhouse, muttering profanities to no one in particular and something about winning being better than nothing, or possibly, better than losing.