It took the Cubs 108 years to win another World Series.
It took Kronqvist 18 years to get back on the field.
”I feel like Kris Bryant,” he says.

The last time Rickard Kronqvist played Tranås, some players on the 2017 Sharks roster were not even born. The Chicago Cubs were still enduring the curse of the Billy Goat and was soon to experience the Steve Bartman incident.

But with the Cubs winning the 2016 World Series over the Cleveland Indians all those curses were thrown out the window. More important, it brought Kronqvist back to the diamond. A bet was placed all those years ago, to start playing baseball again when the Cubs took the Series.

“It was more of a promise than a bet. Promises are meant to be kept and it became a win-win situation for me,” Kronqvist says.

Showing up to practice in his Kristianstad uniform, the younger members on the Sharks roster wondered what kind of relic had found his way to Shark Park. Soon, they found out that the relic was more of an old school ringer.

“It’s an amazing team that really play their hearts out, have fun and are always trying to improve. Just like me,” the utility player says.

During the preseason, Kronqvist has been synonymous with the term utility player. Playing all over the field, including pitching and catching. And even picking his first balls at first base during his Regional series debut.

“I felt like Kris Bryant when I played. That is to say, I played with a smile on my face. The similarities stop there, but it was great to be back,” Kronqvist says, still puzzled from the experience. 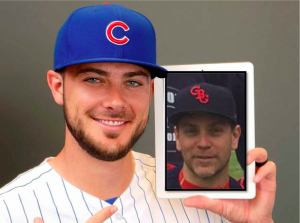 “He’s my boy!” Kris Bryant might have said. Or not. Who knows?

That first game did go well nonetheless, playing seven perfect innings in left field and first base. On the offensive side of the ball, he got on base in all four plate appearances, drawing walks, much like in the good old days.

Ah, yes, the good old days. The last active season for Kronqvist was the 98/99 season playing for Marsa Mustangs on Malta and winning the national championships. Since then, a lot has changed in Swedish baseball and Kronqvist recognizes both the good and the bad.

“There are fewer teams now, but they are all making an effort to include juniors. And nowadays, they all think that winning is better than losing,” he says. 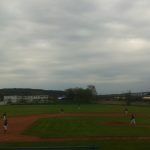 See that guy at first? That might be Kronqvist.

For this upcoming weekend, the Sharks face a fierce competitor as they head to Tranås for a double header. Last season, Tranås finished in fifth place at 11-5 but like the Sharks, they were eliminated in the first playoff round.

This season, Tranås started out facing the heavy favorites Karlskoga Bats during their opener and lost both games, which probably says nothing about the strength of Tranås as a team.

“Last time I faced them was probably in 96 or 97. But they are a solid team, you always have to respect them,” Kronqvist says.

“And one more thing. I hope my comeback will inspire others and bring people back to playing the game in Sweden. Don’t live on past memories, come down to the park and create new ones,” he adds before running off to another practice.