Last practice before the season opener.
Worst turnout all year.
“We need more kids that practice as often as some of our veteran players,” Edgren says.

So far, the season has been almost like a fairy tale. New players, good turnout, great atmosphere. Unfortunately, that has not been the story the last week or two.

“On the whole we have a good turnout with an average of 12-14 people, but it’s rare that we have our starting lineup on the field at the same time,” Coach Jonny Edgren says.

For a team that has been lacking in consistency on defence and on occasion bad communications, teamwork is of the essence and that is not supported by low turnout rate at practices. The week leading up to the first regular season games of the season has seen especially low attendance. 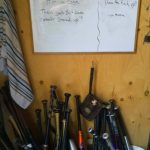 “Many people has denied writing this, especially Jason Norderum.”

“Looking at our whole 24-man roster, one could think it would be nice to see more people there,” Edgren says.

For the home opener on Saturday, May 12th, the Sharks faithful are looking to ace pitcher Mokhlad al-Ghamini to keep the Malmö Pilots on the ground. Coach Edgren will most likely turn to young gun ‘Swirvin’ Shervin Shakki and comeback kid José Martinez to take the mound as well.

On the offensive side of the ball, Sharks will miss the presence of Niclas Ekström in the heart of the lineup but are hoping to find other players to pick up the slack.

“I have great confidence in this group of guys. Whatever has been thrown at them, they’ve come out on the other side stronger and better,” Edgren says.

First pitch at Shark Park against the Malmö Pilots is scheduled for 12.00.

“It will be great to have the regular season start again, hopefully winning will be better than losing this season as well,” Edgren says before leaving for the video room and scouting of the Pilots pitchers.