The Pilots have always been a favorit foe of the Sharks.
On Sunday, they’re looking for wins.
“It won’t be easy,” Coach Edgren says.

Sunday will be the comeback of Erik Earnest in a Sharks jersey. Once again, he will suit up together with his dad, Joel Earnest, in the Sharks lineup. Last time they did so was in the jubilant, Jason Norderum no hitter in 2015:

In relief [of Norderum] came the slightly older Joel Earnest for his first Elitserien appearance on the mound. He promptly gave up three walks to load the bases and left it for his son to figure it out.
And figure it out he did, but maybe not in the way you would expect it.
After striking out the first batter, the second Heat batter lined out to big daddy Joel Earnest in left field who fired a throw to third for the classic 7-5 double play.
“Hey, I gotta help the kid out,” Joel Earnest said.

The addition of Earnest Jr comes as somewhat of a surprise for the Sharks faithful as he has not been seen that much on the Shark Park practice diamond. Be that as it may, few Swedish teams would turn him down. 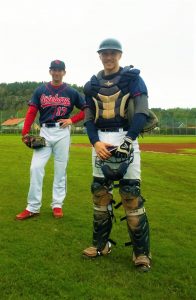 J-Rod and Earnest Jr back in the day.

“Obviously, he was and still is a great player. To any team, he would be a quality addition,” Coach Jonny Edgren says.

The Sharks ride in to the friendly confines of Limhamnsfältet fresh from a split in Tranås where they won game two in nice fashion. Not with the Sharks from that matchup is Shervin ‘The Shervinator’ Shakki who was place on the 10-day DL with an upper body injury. Furthermore, the Miklo Velka of the Sharks ‘Vatos Locos’ – Eric Marquez – will not be travelling south with the team. 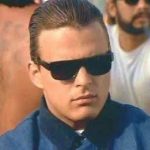 Marquez did not respond to this reporter’s frequent phone calls, but sent an e-mail quote from the fantabulous movie:

“I may be white from the outside, but I’m brown on the inside, TO THE BONE,” Marquez writes.

Which is… weird. But then again, the Paco and Cruz of that trio, José Martinez and José Muñoz, will travel with the team.

This journey will also see the return of Johan Weidolf to the Sharks team. Neither he is a bad addition to the lineup. Quite possibly, he will be an even bigger influence just with his experience and clubhouse presence to the team.

“I know that winning is better than losing, that is what I preach,” Weidolf says.

The Pilots started their season by losing two games to the Karlskoga Bats. That in itself is not something to be ashamed about, since the Bats are one of the premier teams in the league but the Pilots were probably not too happy about the 7-33 run difference on the day.

Göteborg Hajarna had a 6-0 record against the Pilots last season but with additions of Omar Peguero among others, the Pilots will quite possibly not be easy pickings. Furthermore, the excellent Pilots catcher Sean T Kim is apparently still healthy and will be behind the plate to command the Pilots pitching staff. (The fact that Kim is a Giants fan has no effect on his playing ability).

So hey, if you’re feeling for a day of basking in the sun and watching quality(?) baseball – come to Limhamnsfältet on Sunday. First pitch at 12 and they serve the league’s best hamburgers, according to some. They are presumably the only team south of Stockholm that serves hamburgers at their games but that’s not the point. 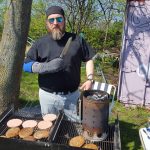 Burgers is a thing.

Sunday is a great day for baseball, come join us!