As the Sharks made their only trip in 2018 to the lovely Limhamnsfältet on Sunday, the first game was full of offensive performance. However, the performance that stood out the most was the one from the battery.

“They know each other inside and out, today, they were brilliant,” Jonny Edgren said of his battery.

With José Martinez on the mound and Toofan Khazal catching him, the Sharks have a dynamic duo that is going to make it hard on the opposing hitters. Sunday was no exception.

Staff leader Martinez carried a shutout in to the sixth inning as the Göteborg Hajarna (3-1) took a comfortable victory over the Malmö Pilots (0-4). After a leadoff hit, Martinez only gave up one or two hits before surrendering his first run in the sixth. Khazal behind the plate, called a great game and generally played exceptional behind the plate in the dusty fields of Malmö.

“He has really taken a step forward the last couple of years. Catching better, throwing better. All better,” Edgren praises his catcher. 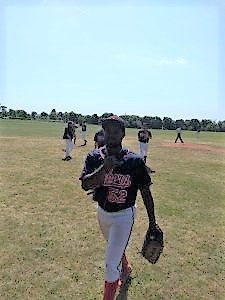 Offensively, the Sharks displayed a true team effort. Only one Shark failed to cross home plate as they amassed eleven hits and twelve walks. Even though eight of those runs came in the seventh inning, the win was never really threatened.

Game two started off even better – for the Sharks. They feasted off Pilots starter Viktor Eriksson (0-2) and put up eleven (!) runs in the top of the first. With Shervin ‘The Shervinator’ Shakki and Mokhlad al-Ghanimi on the disabled list, Edgren turned to his bullpen to cover the whole game.

Joel ‘Big Daddy’ Earnest was slated to start the game but was so eager on earning a spot in that disabled list that he tweaked his ankle during infield outfield. In his stead, Chu Li-Heng started game two and performed admirably, giving up only two runs (none earned) in his two innings.

With the comfortable lead, Edgren wanted to make things interesting for the Malmö crowd and put this reporter on the mound. That did not go well as he gave up seven runs (five earned) while walking a whooping five batters in his two innings of work.

Thankfully, this game also saw The Return of the Earnest (Jr) as Erik Earnest made his official comeback. While he flashed some brilliance in game one, the rust was clearly there. In game two, however, it was a different story. If pitching two runs of shutout relief was not good enough, hit three doubles, drove in four runs and earned a walk. And yeah, those doubles could have been triples had Göteborgsvarvet not been the day before. 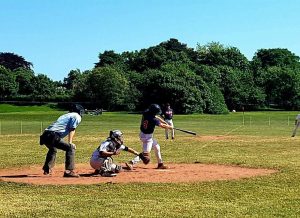 “Winning is better than losing, you can quote me on that,” Earnest said after the second win of the day.

Besides Earnest Jr, it was once again a team effort on offense. Official scorer had a lot of work as the Sharks put up no less than 19 hits and 4 walks in the second one. Other than Earnest and leadoff man Muñoz (who went 4-5), there was a Weidolf sighting on Sunday. 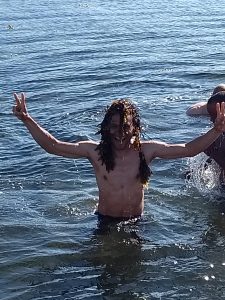 Muñoz, to no avail, tried to impersonate a serpent.

Johan ‘Wheels’ Weidolf then 4-5 himself (6-7 on the day) and had five ribbies in the second game. The veteran first baseman is now hitting .857, which is good.

“We kept having good at bats. Quality at bats, still being aggressive and with good patience,” Edgren says.

With the win streak now at three games, the Sharks will travel to play the undefeated Karlskoga Bats in two weeks. While Sunday was a good display of both defense and offense, it will be a lot tougher in Värmland.

“It’s always a tough one, while today was good we have to play even better when we face the Bats,” Edgren says.

Klas Brinkfledt played defense at second base like he was born to do it.

Khazal also played great defense at second and was wearing a cap.

Lars Karlsson was solid behind the plate in his official catching debut, despite having to catch this reporter.

When this reporter, Edgren, Weidolf and Earnest the elder at one point made out the Sharks bench, it might have been the oldest bench in baseball history.

Almost all Sharks swam after the game.