A new season is almost over.
The same catcher has anchored the Sharks.
And he is better than ever.
“He’s the cornerstone of our defense,” coach Edgren says.

For years now, Toofan Khazal has been the other end of numerous batteries as the Gothenburg Sharks has plowed their way through the regional- and Elitserien play. For years, it has been a not so appreciated position within the organization.

Khazal has more often than not been asked to catch all 14 innings on a traditional gameday. As he is not a young man anymore, one could think that takes it’s toll. But no, the 42-year old keeps putting in the work and getting better each year. 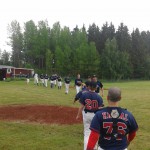 Catcher Khazal can walk the walk.

“I’m working hard off the field. All off season, it’s all about getting stronger and to have that endurance to last a full season,” Khazal says.

And it has payed off. The longtime catcher has especially worked on his throws during this offseason and is now leading the league in caught stealing average at .139 – double from last season. He is also second in caught stealing/9 innings.

“I’m more focused, more concentrated on the task at hand. It’s been rewarding for sure,” Khazal says.

Since 2015, the Sharks faithful has also seen catcher Khazal, also known as ‘Grumpy’, take on a kind of a captain role for the team. A Team dad, if you will. On a regular basis, he is directing the defense and his pitching staff both during gamedays and at practice.

“It’s been great. This year, we have better communication within the team which helps me a lot.”

“Yes, maybe I’m more of a leader but I got to give a hand to our squad who’s taken great strides in communicating better and that makes my job easier every day.

As the Sharks take on the Malmö Pilots on Saturday, they have already clinched a playoff spot. But for the team, and for Khazal, the double header is of great importance. 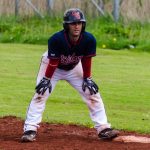 If the Sharks sweep on Saturday, they have a chance to finish in the top three and go straight to the second leg of the playoffs. For Khazal, who can’t participate in the first playoff leg, that is crucial.

“I always want to win ballgames, but yes, after this season it would be pretty great to be able to finish it off with a good playoff run,” Khazal says.

“And yeah, winning is better than losing, right?” he says as he runs off the field.

Come out to Shark Park and enjoy the ballgames on Saturday against the friendly Malmö Pilots. First pitch is at 12!