The Sharks has taken a lot of step forwards during the season.
Against the Firehawks, it was not far enough.
“We could be an Elitserien team again pretty soon,” Edgren says.

The Sölvesborg Firehawks (10-1) hosted the Sharks (7-5) on Sunday after a lengthy road trip for their Elitserien team where they played eight games in six days. And it was somewhat a mangled homeside that showed up, but still with the majority of the players made out of Elitserien players.

José Muñoz led off the game for the Sharks and got the scoring going right away as he gave the Sharks a 1-0-lead against the Firehakws starter Kevin Trudel (2-1).

José Martinez got the nod to start game one for the Sharks and started out great. He held the FIrehawks to one run in the first three innings and the Sharks kept going as they put up three more runs in the second. In the fourth, the hometeam had sort of figured Martinez out and tied the game up at four runs a piece. 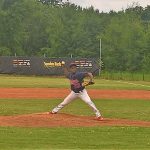 The Sharks added a run in the fifth but the Firehawks tied it once more. Göteborg Hajarna kept on building that picket fence and went in to the bottom of the 7th leading 7-5. With Mokhlad al-Ghanimi on the mound, this game seemed all but over. The Firehawks, however, was not done. They chased al-Ghanimi off the mound and coach Edgren turned to starter Shervin Shakki (2-2) for the save. After a couple of questionable defensive plays for the Sharks, the hometeam could walk it off on a single with two outs that hit off of Jun Konos glove. 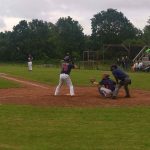 Khazal mumbled that winning was better than losing.

“We played well. As well as we’ve had all season and showed that we can play against an Elitserien team,” coach Jonny Edgren said in the post game interview.

As for the second game, the Göteborg Hajarna side looked heartbroken after the first one and well… let’s just forget about that one (Firehawks wone 10-0 in five innings).

On Wednesday, other news came in as the Norrköping Blue Sox, whom the Sharks were supposed to face on Saturday, had to cancel the games as they could not field a team.

That leaves the Sharks at nine wins on the season and the playoff clinch looks awfully close.

Hernan Martinez turned it what was probably one of the best umpire performances all season.

Muñoz leads the league in stolen bases and al-Ghanimi is tied for second in the same category.

al-Ghanimi and Martinez are second and fourth, respectively, in K/9.

The Sharks were only charged with one error in the first game. Needless to say, that would have been great but this mention has to go to the official scorer.