The Sharks are in the midst of a roller coaster-season.
They certainly enjoyed the ride on Sunday.
“We had great discipline today,” coach Edgren says.

When the powerhouse Karlskoga Bats (5-3) visits Shark Park, the games are usually a dull story for the Göteborg Hajarna (4-2). On Sunday, the plot was different.

Behind game one starter José Martinez (2-0) Hajarna put up a crooked number in the first, scoring three runs off of Bats starter Forrest Weaver (3-1). In the second inning, they put two more runs on the board. The defense has been inconsistent during the season but it was looking as solid as ever on this day.

Martinez was rolling through three innings before running in to trouble in the fourth as he gave up three runs. He never lost his stride, however, and threw a complete game for his second win of the season. On the day, he allowed six hits and two walks while striking out ten.

Game two was wet. Really wet. The rain decided to make life difficult for the players and the field as everyone had to battle wet balls and a wet field. The Bats drew first blood as the put up a run in the second and added four runs in the fourth. 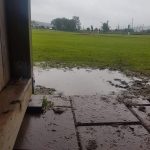 The Sharks never got their offensive production going and it was looking more and more like a one sided affair before starter Mokhlad al-Ghanimi. However, a rain delay occurred after the fifth inning and Eric Marquez reminded his teammates that winning is better than losing.

With the game on the line, the Sharks showed patience at the plate in the bottom of the seventh and loaded the bases with one out. After scoring three runs, oldtimer Johan Weidolf came to the plate as the winning run and hit a line drive down the right field line to tie the game.

Martinez then took matters in to his own hands as he drove in Weidolf with a ground rule double for the walkoff win with the final score of 6-5.

“We had great discipline on both sides of the ball. And this is baseball, anything can happen,” coach Jonny Edgren says.