The Sharks narrowly defeated the Kungsbacka Chiefs in game one of Saturday’s three-team tripleheader, but perhaps even more satisfying was staying within range of the Vithajarna for most of game two.

The veteran Vithajarna squad was stacked; a bona fide all-star team with many of the Gothenburg club’s top players from years past. Warming up for the final game of the day against the Vithajarna, the prospects were not good for the Sharks. They would be facing former national team pitcher Curtis Donne, and were down to just eight players with several key team members unavailable due either to injuries or prior commitments.

Shervin Shakki held the Vithajarna to one unearned run in the first inning, even though there were just two of the team’s less experienced players covering Shark Park’s vast outfield. But help was on the way. When the Sharks took the field in the bottom of the second, standing in center was Zaki and Yudai Yamazaki’s father Chikara, making his first appearance in organized baseball after a layoff of fifteen years. The elder Yamazaki wasted little time in demonstrating his skills, promptly throwing out a runner trying to advance to third. 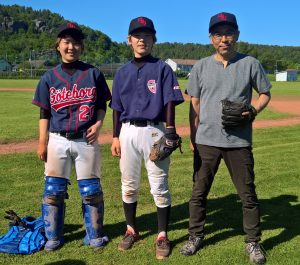 Shervin Shakki, Yudai Yamazaki and Rickard “Comeback Kid” Kronqvist were solid on the mound, and most runs scored by the Vithajarna were unearned. Despite the sometimes-shaky defense, the Sharks played well for the most part and were still in the game until the late innings before going down 10–3.

Saturday’s matchups drew Shark Park’s largest crowd in years, close to matching typical Elite opening day attendance figures. Enthusiasm was high among all three squads and all are hoping for a rematch later in the season. The Sharks are already scheduled to face the Vithajarna again on August 12.

SPECIAL REPORT FROM THE VITHAJARNA DUGOUT BY JOHAN WEIDOLF
It was so much fun to have the old crew back together. We may have all gotten a lot older but the passion and will to make plays and make outs was still there. Denis, hadn’t played in 17 years got behind the plate and caught in both games and blocked to left and right and handled the pitchers in a tremendous way. Hitting wise it was amazing to see how quickly these old players adapted and got back into the groove with good at bats and driving the ball to all fields. Robin Bandgren was even hitting and driving the ball to all fields better than he did during his active period so perhaps Hajarna can hope for a comeback? At times the hits from the old guys were longer than the old players could sprint, trying to go for doubles and triples making people breath really hard to catch our breath but having fun all the way. Martin and Robin did a good job pitching in the first game, in the second Curtis still looked amazing, good velocity and control mowing player down, pitching 4 innings of 1-hit ball and when Hajarna managed to put the ball in play there was a solid defense behind him making it look easy and making outs.
Sami took over and started impressive, throwing hard but lost control for a while and allowed the opposing team to reach on a few walks and then score on wild pitches before he managed to regain control and close out the game.

It was a really strong impressive crew, could definitely see the shape of the team was not what it used to be for many of the players but still it was very impressive to see all the players and we all had so much fun. We will now go back and try to heal and rehab our bodies to be back for the second occasion in August.