First loss of the season does not sound so bad.
But it was kind of bad.
“We played better than last week,” coach Edgren said.

Shervin Shakki (0-1) started game one at Afzelius park in Tranås and, from the get-go, showed that he wants to reign as the ace of the Gothenburg Sharks (2-2) rotation this season. Striking out the side in the first inning while pitching his first game to new battery mate Zaki Yamazaki was an impressive start.

But he was just getting started.

Shakki pitched great all game long and gave up no earned runs over six innings, even though the box score says so. Per usual, the hometown scorer was fonder of awarding home players with hits and therefore excluding a lot of errors on the Sharks defensive side. He did give up a couple of hits (unclear how many as the hits correlate with the errors that do not appear in the box score) walking only one and striking out seven. ‘Swirvin’ Shakki was, however, tagged with the loss as the Sharks offense failed immensely.

Going up against veteran pitcher Nils Bergehed (1-1), the Sharks could not get anything going. While Bergehed pitched great, went the full seven while allowing one run on three hits and four walks, the Sharks did not string anything together. All day long, patience was lacking at the plate and despite having a hectic preseason, they were not locked in at the plate.

To their credit, Tranås played great defense all day long and was booked for no errors (wait, what?) in that first game that ended 4-1 in the favor of Tranås. 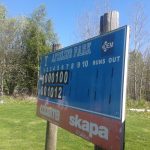 Apparently, the Tranås side also believe winning is better than losing.

The veteran trio of Rickard Kronqvist, Toofan Khazal and Jonny Edgren was the only Sharks credited with hits in the box score but due credit should go to regional debutant Zaki Yamazaki. Catching that first game, giving veteran Khazal some much needed rest, she was very impressive. While keeping Shakki calm and framing pitches all day long, she also threw out runners, successfully tagged runners out at the plate and drew two walks while going 0-1.

Mokhlad al-Ghanimi (1-1) started game two and looked pretty good, although maybe not as sharp as the Hajarna faithful has gotten used to. Walking three, striking out seven and giving up two hits looks pretty nice, but add three runs to that (on three wild pitches) and al-Ghanimi himself is not happy.

The Sharks offense was even more toothless in this one as they only amassed two hits (Shakki, Eric Marquez) and two walks against Tranås starter Felix Millan Casanova (1-0). But wait, now you’re wondering how the frick the Sharks lost 10-0 when starter al-Ghanimi only gave up three runs. Yeah, well about that…

Coach Edgren got some questionable advice to send a hobby reporter to the mound after al-Ghanimi had gone four innings. While the reporter got out of the first inning unscathed, the next one was not so pretty.

He walked a about a million batters and gave up close to that many hits, but may have been the only Sharks player drawing cheers from the home crowd as he made sure the mercy in mercy rule was invoked.

“Who are you to ask that frickin’ question?” the reporter muttered when he tried to interview himself after the game.

On the whole, it was two close, well played games (apart from the inning thrown by yours truly) that quite possibly was fun to watch.

“Even though we lost today, it was a step forward. We look forward to hosting Karlskoga in two weeks,” coach Jonny Edgren said.

The Sharks DL is getting crowded. Niclas Ekström and José Munoz was already there. Add to that that ace pitcher Mokhlad al-Ghanimi and Daniel André and those playoff hopes are starting to look grim.

Sharks had brilliant sushi between games, courtesy of the Yamazaki family.