Only one week until regular season starts.
Only one spring training weekend remains.
Time for Coach Edgren to get some answers.
“I think the bullpen is most important this weekend,” he says.

Pitching depth is something that has been an issue for the Sharks organization for quite some time now. For years, there has been a need for more pitchers, especially Swedish, both in the bullen and in the rotation.

“I think it’s important for me this weekend, to see that we have sufficient depth in the bullpen,” Coach Jonny Edgren says.
“But then again, the most important thing is that everyone feel comfortable in their defensive positions and feel good at the plate,” he adds after some thought.

“We have experienced players that know how to handle new players and between the regional series and the SWBL there is enough games to get everyone in the game,” Edgren says. 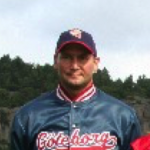 The quality of this image reflects that Jonny Edgren has been in the game for more than 30 years.

Preferably, there would be more games, more practices for the players to get to know each other but Edgren is certain that the current state of the team is beneficial for new players.

“This squad, this core group of guys are really a happy bunch of players. Really including and open, I can see how that really helps,” Edgren says.

Young guns Shervin ‘Swirvin’ Shakki and Hannes Wiström has showed off their skillset during spring training this season and Coach Edgren surely hopes that is something that will continue when the regular season starts.

“I hope that Shervin and Hannes continue to develop and can be a force at the plate this season,” Edgren says.

Adding players adds rivalry within the team. Rivalry can be good for the team, especially when such additions are Japanese siblings Yudai and Momoko ‘Zaki’ Yamazaki and dynamic duo José Martinez and José Munoz.

“I think ‘Zaki’ will surprise everyone this year and be atop the leaderboards on Heatstat,” Edgren says.

“Oh, I almost forgot, winning is better than losing,” Edgren adds before running off to yet another interview.