In what hopefully be a series of old friend-articles, we talked to shortstop/second baseman/pitcher Trolle ‘Swaggy T’ Brandt. In the fall of  2016, Trolle left Göteborg to study and play baseball in Leksand and also play for the Rättvik Butchers.

How is life treating you at the Swedish Academy?

“The life at the academy is both fun and tough. It’s fun to play baseball every day but it’s also hard on you. My body is constantly tired, but it’s fun since it is a good group of guys here that always support each other and have a lot of fun together.

How are  you doing on the field with Rättvik? 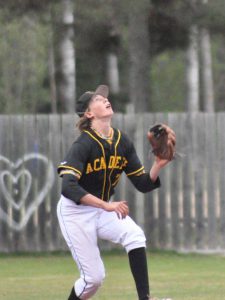 “According to non confirmed rumours, Trolle was seen looking to the sky for signs that winning is better than losing.”

“It’s been loads of fun playing for Rättvik. We’re a young team and have a lot of fun together. We had a good season despite this being our rookie season in Elitserien and even though we lost the semifinals against Stockholm the summer has been fun.”
(Editors note: Trolle Brandt ended his first season with the Butchers with a slash line of .239/.341/.637 with two doubles and a triple).

How was it like to be in the playoffs for the first time?

“Playoff baseball was a little more nervous than during the regular season. But it was a good experience to play under the added pressure and I think that will make me a better ballplayer.”

How much do you miss putting on that Sharks jersey?

What are your thoughts on the Sharks matchup with Karlskoga tomorrow?

“I’ve been following the team and they are doing well. I really don’t know that much about Karlskoga but I’m sure it will work out fine for Hajarna.”

Don’t miss the last chance of the season to see some Sharks baseball at Shark Park. First pitch in the double header against Karlskoga is at 13.00. Next weekend, the team heads to Karlskoga for the regional playoffs.