If the Sharks fail this season, it will not be for lack of trying.
The schedule includes at least 36 games.
“I’m in over my head this year,” travel coordinator Joel Earnest says.

An ambitious second season of the South West Baseball League that includes more teams for this season is the main reason for the Shark’s season expanding. Depending on how many games the SWBL dates include, the season will include 36 to 46 games.

“It’s a lot to organize, I should get a raise”, travel coordinator Earnest says. 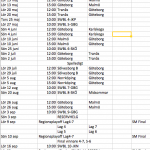 The Sharks schedule is better than losing.

“We have a lot of time to practice winning. Apparently, it’s better than losing,” coach Jonny Edgren says.

The SWBL season started last weekend against Jönköping and Skövde and continues tomorrow, April 29th, when the Shark bus travels north to Tranås for a triple header.

Silver slugger award 2018
José Muñoz laid hands on the desirable Silver Slugger award for the 2018 season! His outstanding performance at the plate earned him the award. José was hitting .510 and had an OPS (On base plus slugging) at 1.227.
Follow on Instagram
This error message is only visible to WordPress admins