In what hopefully will be a series of old friend-articles, we start off with pitcher and first baseman Ted ‘Teddy Ballgame’ Bratsberg. In the midst of the 2016 winter, Ted left Göteborg to study and play baseball (north of the wall) in Umeå.

– How is baseball life treating you in Umeå?

“Baseball in Umeå is a bigger thing than I could ever have hoped for. We play intrasquad games once a week with full team which, for me, is amazing. There’s a real spark up here! 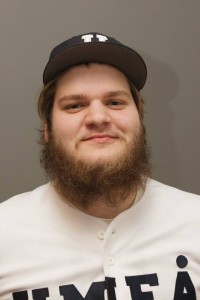 Between the lines, one could almost think that ‘Teddy Ballgame’ thinks that winning is better than losing.

– How are you doing on the field?
“I’m doing really well, both as a student and athlete. It was not a good feeling when The Sharks decided to fold the elite team when I, for the first time, felt like I was an asset to the team.”

“I needed a change of scenery and it was obvious to me that Umeå wants to win and promote to Elitserien, just like me”.

– How will Umeå Blue Harriers fare season?
“We had the best opening weekend I could have imagined with two wins. We’ve obviously come back to earth since and are now 2-4. But I believe in this team and we will do everything to get into the playoffs.”

– How much do you miss putting on that Sharks jersey?
“Of course I miss playing back home and even more so when The Sharks are playing so well this season.”

“But it is the same reasons I miss playing there that had me changing teams. The South league hasn’t changed at all the last seven years that I played so it’s nice to face new pitchers and players that love baseball as much as I do.”

– What are your thoughts on the Sharks matchup with Tranås this weekend?
“I expect nothing less than a sweep! With the kurdish duo of Hiba and Josef, nothing is impossible!”