A sweep is now an ordinary thing.
Winning six games in a season is not.
“We played well today,” coach Jonny Edgren says.

Göteborg Hajarna (6-6) got off to a quick start on Sunday when they took a 1-0 lead in the bottom of the first. They never looked back from that.

Behind Mokhlad Al-Ghaminis (2-3) terrific start on the mound they held the Malmö Pilots (2-6) scoreless through the first three frames at a cloudy and rainy Shark Park. After adding two more runs in the third inning, the Pilots got on the board in the fourth in what would prove their only run in this one.

Al-Ghamini struck out eleven in five innings of work, scattering two hits, one walk and the lone run (unearned) for his second win of the season. While at the plate, Al-Ghamini took matter in to his own hands scoring twice on two walks.

The Sharks as a team continued on their moneyball-inspired offense, totalling twelve walks and only one hit. On the basepaths they continued to be as effective as they have been all season. In this one, they stole 13 bases.

Josef Hussein continued to be the spark plug of that offense atop of the lineup, going 1-2 with two walks, a run scored and stealing three bases. With a 5-1 lead, Hussein came in to relieve Al-Ghamini on the mound and kept the Pilots scoreless in two innings on the hill, striking out four and giving up two hits.

Hajarna added a run in the sixth to win game one 6-1.

“We always win when I get hit by a pitch,” first baseman Niclas Ekström said.

With that fifth win of the season, the Sharks regional team swam in to unknown waters. Since the official statistic outlet is nothing close to the Elias Sports Bureau, this reporter might be wrong. But the Sharks has not won more than four games in a season since at least 2009.

The sixth win was not far away.

Mikael Lindquist got the nod for the second game of the double header and pitched well for three innings. With a relative solid defense, behind him, Lindquist gave up three runs (two earned) on five hits and four strikeouts while walking none.

The Pilots did, however, take the lead in game two. Scoring a run of Lindquist in the first inning but the Oakland Athletics look a likes would strike back.

In that bottom half of the first and the Sharks tied at 1-1, Joel Earnest, recently activated from the DL, broke the game wide open with a two RBI-single to center field. 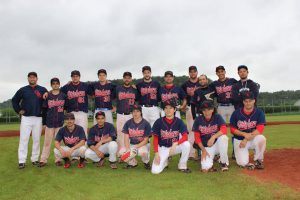 Instead of ‘cheese’, this Sharks team yelled out “Winning is better than losing” as the picture was taken.

Hajarna figured out Pilots starter Eric Browne early and added four more runs in that first inning before the Pilots finally got the third out.

In the fourth inning, and the Sharks leading 9-1, legendary pitcher Hiba Nabi entered from the bullpen and provided four innings of scoreless relief on two hits, four strikeouts and one walk.

“To have this kind of pitching depth is really something,” coach Jonny Edgren said.

scoring position, they literally ran in to trouble. Making some unusual baserunning gaffes.

“If anything, I guess that was our one not so good thing today. But I like to see the players being agressive on the basepaths,” Edgren added.

Notables:
Hajarna committed a total of two errors in two games. Quite possibly the lowest total ever.

Jun Kono, Fredrik Unger and Hannes Wiström made the Sharks season debut on this day.

The Sharks are in fourth place at the moment. Altough they have played the most games in the league, they are well in the playoff race.

Al-Ghamini leads the lead in strikeouts, 22 K’s ahead of the Albys Ramon Illa in number two.

While lowering his OBP  some, Niclas Ekström is still third in the league in that category. Now with a measly .678 OBP.