Apparently, playing well leads to winning games.
Apparently, winning is better than losing.
“I just don’t know how they will manage without me”, newly appointed bench coach Joel Earnest said.

Göteborg Hajarna (3-3) arrived at Tranås baseball field with just enough players to field a team. On the coaching side however, they were two deep.

With coach Jonny Edgren on scouting duties in eastern Europe, the club appointed some no-name reporter as token manager with Joel Earnest, currently on the DL, handling bench coach duties. The guy actually running the show on Saturday was Earnest.

And what a show it was. 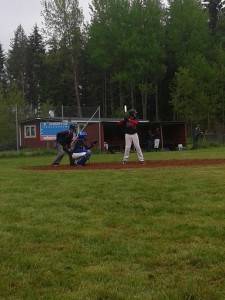 “Winning actually is better than losing”, Mikael Lindqvist said after getting his first win of the season.

Hajarna came out firing on all cylinders in the first game, scoring two runs in the first and five runs in the second to take a 7-0 lead over Tranås (1-1) after two innings. Starter Mikael Lindqvist (1-1) in the end got the win after his his two innings of no hit ball, while going 2-4 with an RBI at the plate.

“Yes, Mikael had the no hitter going, he was pitching brilliantly, but we have such a deep pitching staff this year I felt it was time to get someone else out there”, Earnest said.

Josef Hussein came in to relieve Lindqvist and got to see the Sharks add five runs in the third, two runs in the fourth before they finally put up a zero in the fifth. Tranås tried to prolong the game in the fifth but Hussein put a stop to the rally and the Sharks won game one 14-3 in five innings.

Hajarna had quite a scare in the first inning as veteran catcher Toofan Khazal felt something in his back leg. Khazal, however, shook that off and caught 12 spotless innings behind the plate, adding two walks, one hit and three RBI’s on the day.

With the win, the Sharks had their first three game winning streak since 2011. That streak, sadly, wouldn’t last very long.

Johannes Liljegren (1-0) started the game for Tranås and brought the Sharks offense back to earth. He went 6.1 innings allowing two runs on five hits while striking out 12 and walking four. That was something the Sharks couldn’t match on this day. 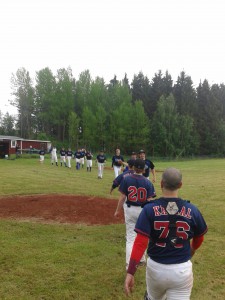 Catcher Khazal will, as always, be back in action next week.

Tranås went to a 1-0 lead in the second and added two runs off Sharks starter Mokhlad Al-Ghamini (1-2). The Tranås hitters figured Al-Ghamini out and Earnest took him out for young gun Shervin Shakki in the fourth inning. Shakki pitched well for 1 & 1/3 inning before Earnest came with the hook. Entered the game did none other than Sharks legend Hiba Nabi, who pitched 1 & 2/3 inning of two run ball.

“Our defense really showed its potential in the first game,” says Earnest. “Good catches, good throws and generally smart play. The guys have put in the work and it’s beginning to show.”

Notables:
Joel Earnest has the highest winning percentage of any bench coach in Göteborg Hajarna history.

Every Hajarna batter got on base in the first game.

The Sharks are in fourth place, well in the playoff race.

Next, the Sharks travel to Malmö on June 4th. The home opener is the following weekend, June 11th, when the Sharks host Tranås.