Eight days is a long time in this media climate.
Does anyone remember those games against Tranås?
“What?! I have no idea,” Coach Edgren says.

Sadly, this reporter was not at all great at performing in his main task following the games against the Tranås Royal Cranes (e.g. Tropical Thunderstorm) last Sunday. Not being able to post even a quick recap in eight days is just disgraceful.

“It can’t go on like this,” an anonymous source told Hajarna.se.

Anyway… the Sharks started their home opener with ace José Martinez (2-2) last Sunday and he was up to the task. While maybe not being at his sharpest, he did perform as the Sharks won the first game of the double header 16-6 in in six innings.

He earned the win going the distance, giving up six runs (four earned) on seven hits, while walking four and striking out four. As always, he was backed by the stellar backstop named Toofan Khazal who now might focus more on the softball side of things. 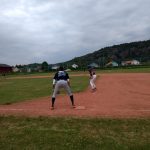 Earnest the younger, on his way to steal second.

On the other side of the ball, the Sharks wasted no time at all as they put up three runs in the first and second inning while holding the Tropical Thunderstorm scoreless through the first two frames.

Göteborg Hajarna (4-4) actually kept things interesting, not putting up more runs on the board, all game long but closed it out in the end. With the score at 10-6 in the bottom of the sixth, six Sharks swam across the plate to end the game on mercy rule.

In the second one, it would be the other way around.

As Shervin ‘Shervinator’ Shakki came back from the DL, he got the nod from coach Edgren in the second game but the rust was showing. That rust, however, was not from Shakki himself but from the Sharks defense that practically handed Tranås the game, making costly error after costly error. 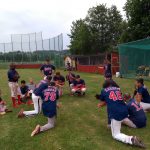 Edgren, to no avail, explained why winning is better than losing.

Marcus Bernander, the legendary Sharks scorekeeper, had to score eight runs on Shakki but only two of them were earned in the end. While Shakki didn’t have his usual pinpoint command (walking five), he did only allow five hits and notched four strikeouts.

Offensively, the Sharks were hapless in the second game of the day and even juggernaut José Munoz couldn’t figure out Tranås starter Nils Bergehed (3-0). Instead, the offensive force was lead by veterans Klas Brinkfeldt and Erik Earnest who both went 2-3. 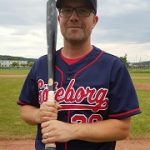 Brinkfeldt is sort of cute.

In the end, the Tropical Thunderstorms drowned the Sharks 15-5 in six innings.

“We should be better than this, we should be working harder during the weeks,” coach Edgren says after the game.

Martinez went 4-5 and Lars Karlsson went 4-4 in the first game.

Daniel André was scored for an outfield assist, probably because his walk up song was Aqua’s Barbie Girl.