As this reporter was sometimes unable or unwilling to provide material, Hajarna.se was looking for help.
They found it in an earnest reporter. 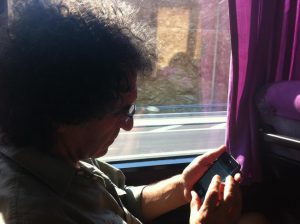 In this picture, Earnest is writing “Winning is better than losing” on his smartphone (true story!).

While the veteran outfielder/first baseman/pitcher does provide value on the field, his primary legacy might become this websites new star reporter. As Earnest joins the Hajarna.se ‘team’, he will provide much needed relief to a beleaguered reporter staff.

“I’m proud to be joining the editorial staff of such a widely respected website as Hajarna.se, and am looking forward to working with the reporter already on the staff,” Earnest says.

Hopefully, Earnest can also provide much needed visual work. Few know that he was once considered one of the best photography prospects in the United States.