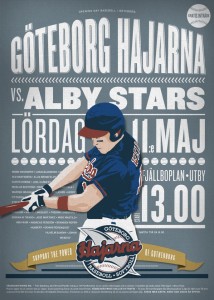 Shark Park @ 1300 versus Alby Stars. The second game is officially scheduled to 1600, but will start after a short break after game one ended.

Both Alby and Gothenburg faced tough opponents for the starting games. My guess would be that the double header played here in Gothenburg would echo for the rest of the season saying who would rank ahead of the other. A fair assumption is that will be a great deal of action in the games. Both teams are exited to get their first win.

Mark this Saturday for a visit to Shark Park! Instructions on how to add the game calendar to your mobile device is available at the Calendar.